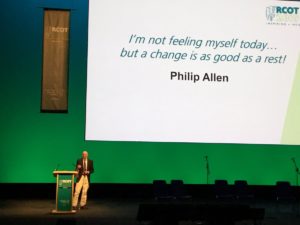 While on holiday in 2010, Phil Allen suffered a severe traumatic brain injury in a cycling accident (and, “yes – he was wearing a helmet”!). It left him in a coma for several weeks, followed by a lengthy period of post-traumatic amnesia,

He sustained a loss of vision in one eye and hearing loss in one ear.

Nevertheless, this was a minor inconvenience, compared to the lasting changes to his mental and, in particular, emotional capacity.

Phil is a former, university law lecturer and, at the time of the accident, was employed as a senior, in-house, lawyer by a global law firm.

He was (and remains) married, with three children.

Phil now, takes up the story:

In addition to the physical issues previously mentioned, many of my circumstances have, by reason of the accident, changed.

Many of the activities in which I used to engage, are now impossible or require significant adaptation – including the provision of much outside, assistance.

Perhaps, though, more important circumstantial, alteration is the fact that I now live alone and paid employment is no longer possible.

Life as a conventional family man and as a solicitor is a thing of the past and incapable of resurrection.

Over and above all of this (but nevertheless affected by it) is the mental damage that has been incurred.

It is worth stressing at this stage that such harm is often far from apparent to a third party. Physical harm can be fairly patent, as are some types of psychological dysfunction. Damage of the latter type, though, can often be harder to spot. More latent damage is sometimes referred to as a ‘hidden disability’ and a tendency to “put on a brave face” doesn’t help to bring it out into the open!

An outsider, reading this or meeting me, might be tempted to say: ‘There’s nothing wrong with you’. In reality though, what is going on behind the scenes constitutes an enormous personal challenge. Much of my own psychological harm falls very firmly, into the concept of hidden disability.

Let’s now look at some effects of the damage to my psychological functions:

All major mental functions have been affected by the injury. For example, my long and short-term memory is now terrible. I am easily, confused and find planning and organization rather, difficult.

My most serious mental problems though, are a disruption of the psychological function, we call emotion – or to put it another way – feelings.

I now suffer from emotional confusion but to me, the, by far and away, biggest (and, needless to say, most problematic) issue has been (and to an extent, still is) what I sometimes call my personal black cloud!

The light-hearted nature of this expression should not lead to an underestimation of the magnitude of damage in this area. It is very great indeed!

I have suffered from an immense, surfeit of negative feelings, including anxiety, worry and frequent feelings of hopelessness and inadequacy. This is to an extent a product of my circumstantial changes. The position is however worsened by the fact that my newfound mental state results in a perhaps exaggerated, negative reaction to them.

I have had a great sense of having lost so much, as to be a new and inadequate person – maybe even a pretty, worthless one.

Am I a bad husband and father?

I am no longer sufficiently competent to pursue my chosen career!

I need professional care on almost every day, when I used to be able to look after myself, perfectly well.

My life has seemed to be something of a shadow of its former self.

On many occasions, the fact that Phil 1.0 had morphed into Phil 2.0 has felt like a decidedly backward step and one that is a deep source of regret and distress.

It hopefully goes without saying that something needed to be done about this.

I am pleased to report that the process is underway! Not there, yet but the journey has commenced.

As will become apparent, this would not have been possible, without the tireless, support of family, friends and professional care workers.

Within the latter category and very importantly, is AKA case manager and occupational therapist, Gillian Gorry. She has devised and oversees a detailed care package. In doing so she is managing my changes and as such is responsible for “version control”!

So what am I doing about it?

Certainly for myself, I have found that meaningful occupation – how I fill my time – is essential to my emotional well-being.

What I am striving for is a full and worthwhile lifestyle, so as to produce a personal acceptance and appreciation of Phil 2.0.

I want to feel proud of Phil 2.0 and filling my time in an appropriate manner is a priceless tool. Phil 2.0 is not the same as Phil 1.0 but different is not necessarily worse!

I strive to accept alteration.

Rather than spending so much time feeling sorry for myself, I am now trying to notice and appreciate that, different as they may be, things aren’t really too bad. I am lucky to be still here and to be able to engage in all the activities in which I now engage.

Meaningful occupation is working wonders. It raises my mood and otherwise assists in my emotional wellbeing. For me, at least, the services of those who facilitate my activities (be they family, friends or professionals) are very valuable, indeed!

In the past I have felt that such care is intrusive and unnecessary. Those who provide it might be relieved to hear that I am coming round from that attitude.

In addition to accepting adaptation I am learning to appreciate assistance.

Let’s now finish with a quick look at some (space doesn’t permit anything like comprehensive coverage – so, selected highlights only!) of the ways in which I now spend my time.

Note the word “time”. If nothing else one result of my injury and, in particular, activities that I can no longer undertake (including going to work) has given me a lot more time to fill and many of it’s new contents are lot less tiring and stressful (and are often, more fun) than the old ones.

As I will allude to, providers of care have assisted me (and, where appropriate, continue to do so) with very many of my current activities.

How do I fill my days?

Here are a few examples of personal, meaningful occupation

I might not be able to work as a solicitor any longer, but, in the loosest sense, my working life has not come to a complete end.

I now spend a couple of days a week, engaged in voluntary work for charity which provides assistance for the visually and hearing impaired. Arising from this I have started to learn British Sign Language and earned an initial qualification in it.

I have received support in all of this from care workers – one of whom, now takes an active interest in and has made donations to, the charity. The same individual not only gave me a lift to BSL classes but has also participated in a few and was generally very supportive of this activity.

I play the flute, guitar and synthesizer. Since my accident have started to write and record some music (“I don’t hear a single”!). Another care worker is a very good guitarist and we are working on some recordings. We have also played, live, together on a few occasions.

Sport is another major activity for me. I swim, cycle (well, visual impairment necessitates use of a tandem) and run. In recent years I have joined running and triathlon clubs, with which I train regularly. I both run and attend a gym with a care worker. We have taken part in a running race together and indeed, I have devised a training plan, for an upcoming race that he has entered – now, how’s that for, so called, “patient activation” (collaboration)?

I have joined a book club and this has introduced me to much new and enjoyable literature. For example, what I flippantly refer to as “Georgian chick-lit” – the Brontes and the like!

It is finally worth mentioning that I have taken up factual writing and have had a couple of pieces published (albeit in rather low-key publications!)

Hopefully it will be agreed that this is a pretty full and worthwhile life and nowhere near as dark as I have considered it to be.

Keeping myself appropriately occupied (together with positive reflection, thereon) is exceedingly important to me. In so many of the above activities, I have received invaluable encouragement and assistance. My gratitude is immeasurable.

Different is not necessarily worse.

In the words of Michael Stipe, the REM front-man:

“I guess a three-legged dog is still a dog. It just has to learn to run differently”.

Phil 2.0 is that dog and those who provide him with care, are helping him to run, again.